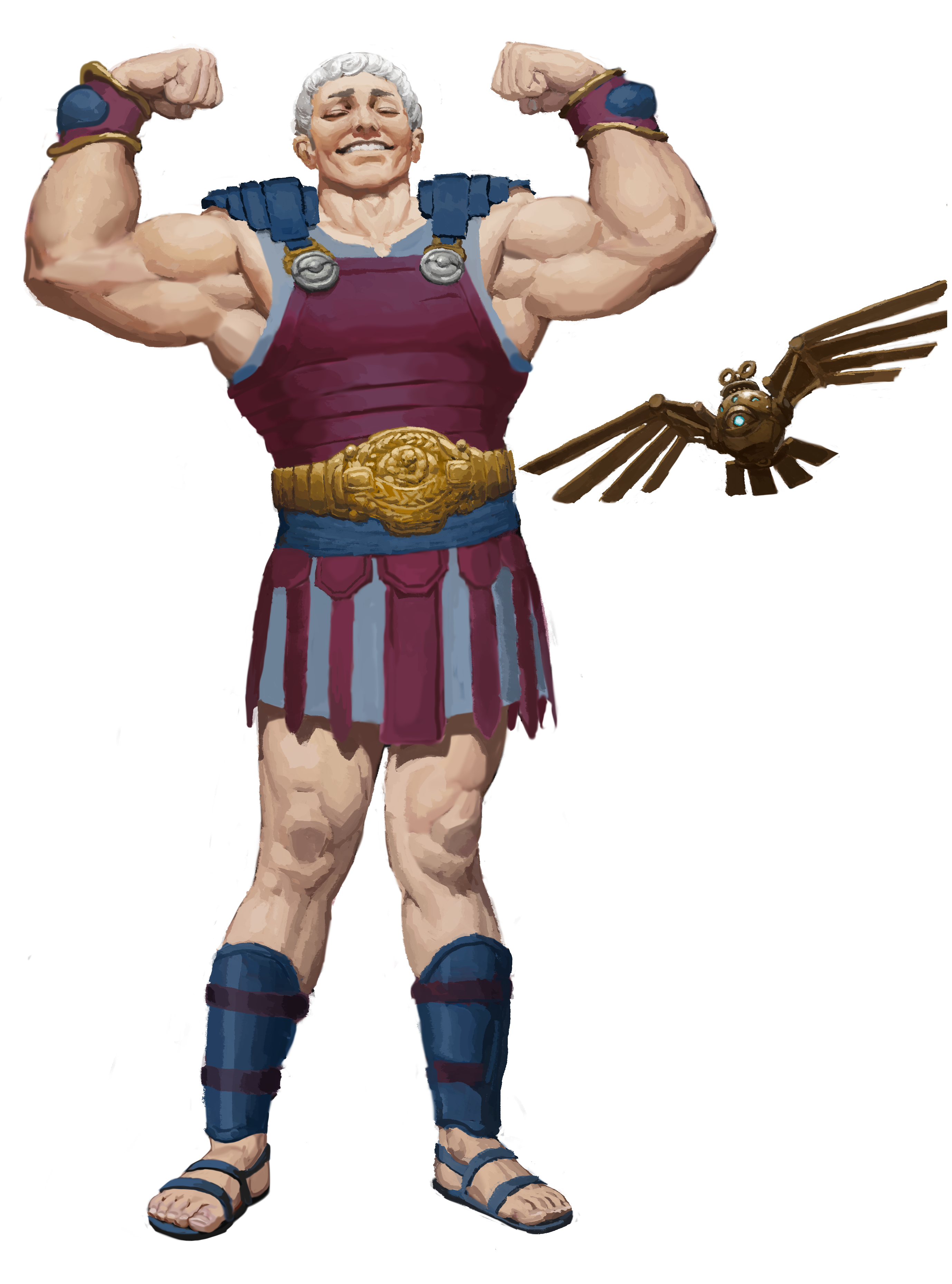 For the glory of my fans!

Entertainment comes in many forms. Some people like music, food, comedy, or even magic. But there are some that like to watch violence.

Enter the gladiator. Fighting for survival in a dangerous arena with monsters and enemies left and right is just another day in the life of the gladiator. The gladiator is a performer, yes, but a performer of exhilarating, jaw dropping, heart stopping combat. Every second, keeping the crowd roaring and his enemies’ blades from killing him.

Role: The gladiator is a warrior who flourishes his skill and ability to impress those that are watching. He is a very capable fighter who can hold his own in battle, finishing with a bow to make onlookers go wild for him and his adventuring party. At the end of the day, a Theian gladiator strikes fear and creates frustration in his enemies while giving his allies the confidence to pull through.

Experts In and Out of the Arena

Theian gladiators know their weapons, but they’re more than just the average soldier or warrior. They’re artists. They do not merely wield a glaive or a net, they use it as an extension of their showmanship, a conduit through which they can earn the respect of their peers and the adoration of their fans. Gladiators can be bruisers, dancers, or watchdogs, taking on an appropriate role for the type of performance they want to give.

When his sensor is active, the gladiator’s entire demeanor can change. He becomes a face, a heel, determined by a combination of his opponent and how he wishes to best grab the crowd’s attention.

As you build your gladiator, consider what encouraged you to join and what skills you want to show off to the fans watching through your sensor. Were you drawn to the industry as a fan yourself and wanted to get in on the action? Were you a warrior in need of extra money or hoping to make a name for yourself? Do you have a rival who is also a gladiator and this is the best and easiest way to confront them?

Your training can come from anywhere. Maybe you’re a noble’s kid who acted as a squire before signing up as a gladiator to make your own way? Perhaps you are looking to get off the streets as soon as possible? Or you could have already spent years of your life fighting to survive and it’s time you did something more with it?

Quick Build: You can become a decent gladiator by following these suggestions. First, Strength or Dexterity will help you when wielding your preferred weapons in combat. Charisma is equally important to help you draw in greater crowds and earn greater benefits for your hard work; and Constitution helps you stay in the fight that much longer. Finally, choose the entertainer (gladiator) background.

As a Theian gladiator, you gain the following class features.

At 1st level, you adopt a common stance that you use when fighting that gives you an edge in some situations. Choose one of the following artful stances. You gain a bonus action and can use it to enter an artful stance on your turn. You can leave an artful stance as a free action.

You learn one additional artful stance of your choice at 6th, 11th, 17th, and 20th level. Each time you learn a new artful stance, you can also replace one artful stance you know with a different one.

Aine Position. You gain tremorsense, the ability to detect and pinpoint the origin of vibrations within 60 feet while in this stance, provided that you and the source of the vibrations are in contact with the same ground or substance. Tremorsense can’t be used to detect flying or incorporeal creatures.

Beau Position. While in this stance, you and your allies benefiting from your Share the Popularity have advantage on Charisma (Performance) checks and saving throws made against gaze attacks and illusions with a visual element.

Bloc de Bras Position. While in this stance with at least one free hand and a creature hits you with a melee attack, you can use your reaction to attempt a DC 15 Strength saving throw. On a success, you take half damage from the attack and grab the creature’s weapon. You and the creature are not grappled, but neither of you can use the weapon or leave your space until you drop the weapon or the creature uses an action to break your grab.

Break Automne Position. While in this stance with at least one hand free, you can use your reaction when you fall to reduce any falling damage you take by an amount equal to five times your Theian gladiator level. You can also use this as an action or bonus action when you are adjacent to a wall to jump as if you had a running start.

Calecon Position. While in this stance, you can use your reaction when a creature misses you with an attack to gain advantage on your next attack against it before the end of your next turn.

Chorbus Position. While in this stance and not wearing heavy armor,  your speed increases by 10 feet and you ignore up to 5 feet of difficult terrain when you move.

Donjon Position. When you make your first attack on your turn while in this stance, you can decide to attack recklessly. Doing so gives you advantage on melee weapon attack rolls during this turn, but attack rolls against you have advantage until your next turn.

Extra Attack (11th Level Required). The number of attacks you can make whenever you take the Attack action on your turn increases to three while in this stance.

As a Theian gladiator, you are given a magical sensor that allows your fans to follow your exploits, cheering you on from the safety of their villages and cities while you delve into dangerous environments and fight deadly enemies.

At 1st level, you can activate and deactivate your sensor as an action on your turn. While your sensor is active, you have disadvantage on Charisma (Persuasion) and Dexterity (Stealth) checks. You also gain a Gladiator Inspiration Die, a d6.

You can use your Gladiator Inspiration dice a number of times equal to your Charisma modifier (a minimum of once). You regain any expended uses when you finish a long rest.

Your Gladiator Inspiration die becomes a d8 when you reach 13th level.

Beginning at 2nd level, you can use the bonus action granted by your Artful Stance to take the Dash, Disengage, or Help action.

At 3rd level, you choose a role that you play while entertaining your fans. Choose Bruiser, Dancer, or Watchdog, all detailed at the end of the class description. The role you choose grants you features at 3rd level and again at 7th, 10th, 15th, and 18th level.

Beginning at 6th level, on your turn, you can use a Bardic or Gladiator Inspiration die as an action to regain hit points equal to twice the number rolled.

Once you or an ally uses this feature, you must finish a short or long rest before you can use it again.

At 9th level, on your turn, you can use an action or the bonus action granted by your Artful Stance to choose one ally other than yourself within 60 feet of you who can hear you. That creature gains disadvantage on Charisma (Persuasion) and Dexterity (Stealth) checks and can use your Gladiator Inspiration dice while your sensor is active.

At 20th level, when you roll initiative and have no uses of Entertainer left, you regain one use.