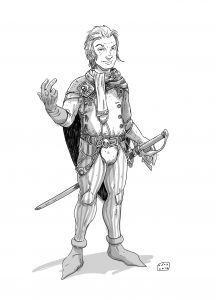 Optimistic and cheerful by nature, blessed with uncanny luck, and driven by a powerful wanderlust, halflings make up for their short stature with an abundance of bravado and curiosity. At once excitable and easy-going, halflings like to keep an even temper and a steady eye on opportunity, and are not as prone to violent or emotional outbursts as some of the more volatile races. Even in the jaws of catastrophe, halflings almost never lose their sense of humor. Their ability to find humor in the absurd, no matter how dire the situation, often allows halflings to distance themselves ever so slightly from the dangers that surround them. This sense of detachment can also help shield them from terrors that might immobilize their allies.

Halflings are inveterate opportunists. They firmly believe they can turn any situation to their advantage, and sometimes gleefully leap into trouble without any solid plan to extricate themselves if things go awry. Often unable to physically defend themselves from the rigors of the world, they know when to bend with the wind and when to hide away. Yet halflings’ curiosity often overwhelms their good sense, leading to poor decisions and narrow escapes. While harsh experience sometimes teaches halflings a measure of caution, it rarely makes them completely lose faith in their luck or stop believing that the universe, in some strange way, exists for their entertainment and would never really allow them to come to harm. Though their curiosity drives them to seek out new places and experiences, halflings possess a strong sense of hearth and home, often spending above their means to enhance the comforts of domestic life. Without a doubt, halflings enjoy luxury and comfort, but they have equally strong reasons to make their homes a showcase. Halflings consider this urge to devote time, money, and energy toward improving their dwellings a sign of both respect for strangers and affection for their loved ones. Whether for their own blood kin, cherished friends, or honored guests, halflings make their homes beautiful in order to express their feelings toward those they welcome inside. Even traveling halflings typically decorate their wagons or carry a few cherished keepsakes to adorn their campsites.

Halflings rise to a humble height of 3 feet. They prefer to walk barefoot, leading the bottoms of their feet to become roughly calloused. Tufts of thick, curly hair warm the tops of their broad, tanned feet.

Their skin tends toward a rich cinnamon color and their hair toward light shades of brown. A halfling’s ears are pointed, but proportionately not much larger than those of a human.

Halflings prefer simple and modest clothing. Though willing and able to dress up if the situation demands it, their racial urge to remain quietly in the background makes them rather conservative dressers in most situations. Halfling entertainers, on the other hand, make their livings by drawing attention, and tend to go overboard with gaudy and flashy costumes.

Rather than place their faith in empires or great causes, many halflings prefer to focus on the simpler and humbler virtues of their families and local communities. Halflings claim no cultural homeland and control no settlements larger than rural assemblies of free towns. Most often, they dwell at the knees of their human cousins in human cities, eking out livings as they can from the scraps of larger societies. Many halflings lead perfectly fulfilling lives in the shadow of their larger neighbors, while some prefer more nomadic lives, traveling the world and experiencing all it has to offer.

Halflings rely on customs and traditions to maintain their own culture. They have an extensive oral history filled with important stories about folk heroes who exemplify particular halfling virtues, but otherwise see little purpose in studying history in and of itself. Given a choice between a pointless truth and a useful fable, halflings almost always opt for the fable. This tendency helps to explain at least something of the famous halfling adaptability. Halflings look to the future and find it very easy to cast off the weight of ancient grudges or obligations that drag down so many other races.

A typical halfling prides himself on his ability to go unnoticed by other races—a trait that allows many halflings to excel at thievery and trickery. Most halflings know full well the stereotypical view other races take of them as a result, and go out of their way to be forthcoming and friendly to the bigger races when they’re not trying to go unnoticed. They get along fairly well with gnomes, although most halflings regard these eccentric creatures with a hefty dose of caution. Halflings respect elves and dwarves, but these races often live in remote regions far from the comforts of civilization that halflings enjoy, thus limiting opportunities for interaction. By and large, only half-orcs are shunned by halflings, for their great size and violent natures are a bit too intimidating for most halflings to cope with. Halflings coexist well with humans as a general rule, but since some of the more aggressive human societies value halflings as slaves, they try not to grow too complacent. Halflings strongly value their freedom, especially the ability to travel in search of new experiences and the autonomy this requires. However, practical and flexible as always, enslaved halflings seldom fight back directly against their masters. When possible, they wait for the perfect opportunity and then simply slip away. Sometimes, if enslaved for long enough, halflings even come to adopt their owners as their new families. Though they still dream of escape and liberty, these halflings also make the best of their lives.

Halflings are loyal to their friends and families, but since they dwell in a world dominated by races twice as large as themselves, they have come to grips with the fact that sometimes they need to scrape and scrounge for survival. Most halflings are neutral as a result. Though they usually make a show of respecting the laws and endorsing the prejudices of their communities, halflings place an even greater emphasis on the innate common sense of the individual. When a halfling disagrees with society at large, he will do what he thinks is best. Always practical, halflings frequently worship the deity most favored by their larger and more powerful neighbors. They also usually cover their bets, however. The goddess of both luck and travel seems a natural fit for most halflings and offering her a quick prayer every now and then is only common sense.

Their inherent luck coupled with their insatiable wanderlust makes halflings ideal candidates for lives of adventure. Though perfectly willing to pocket any valuables they come across, halflings often care more for the new experiences adventuring brings them than for any material reward. Halflings tend to view money as a means of making their lives easier and more comfortable, not as an end in and of itself. Other such vagabonds often put up with this curious race in hopes that some of their mystical luck will rub off. Halflings see nothing wrong with encouraging this belief, not just in their traveling companions, but also in the larger world. Many try to use their reputation for luck to haggle for reduced fare when traveling by ship or caravan, or even for an overnight stay at an inn. They meet with mixed success, but there are just enough stories circulating about the good fortune that befalls people traveling with halflings to give even the most skeptical pause. Of course, some suspect that halflings deliberately spread these reports for just that reason.

Your halfling character has a number of traits in common with all other halflings.

Age: A halfling reaches adulthood at the age of 20 and generally lives into the middle of his or her second century.

Alignment: Most halflings are lawful good. As a rule, they are good-hearted and kind, hate to see others in pain, and have no tolerance for oppression. They are also very orderly and traditional, leaning heavily on the support of their community and the comfort of their old ways.

Size: Halflings average about 3 feet tall and weigh about 40 pounds. Your size is Small.

Speed: Your base walking speed is 25 feet.

Lucky: When you roll a 1 on the d20 for an attack roll, ability check, or saving throw, you can reroll the die and must use the new roll.

Brave: You have advantage on saving throws against being frightened.

Halfling Nimbleness: You can move through the space of any creature that is of a size larger than yours.

Languages: You can speak, read, and write Common and Halfling. The Halfling language isn’t secret, but halflings are loath to share it with others. They write very little, so they don’t have a rich body of literature. Their oral tradition, however, is very strong. Almost all halflings speak Common to converse with the people in whose lands they dwell or through which they are traveling.